Pumpkin Baked Pasta with the Last of Our Wonderful Garden Chard 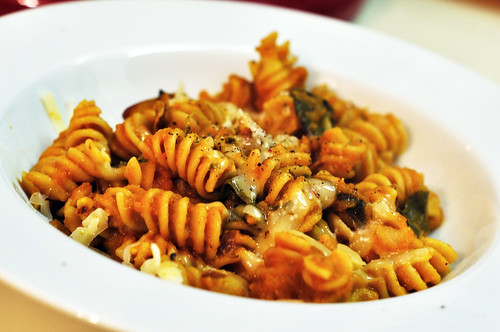 Ah the joys of cooking in the dark. It drives me crazy! Hopefully we’ll have that remedied soon (fingers crossed!) so I won’t have to continue spending hours tweaking and pulling light into my photos in order to make them presentable. Might have to try Ashley at Edible Perspective’s “Paper Towel Bounce” for the time being. The things we do for good foodie photography border on creative obsession don’t they? For now we’ll just call it dedication.

I’ve actually been wanting to try and make Pumpkin Baked Pasta since last fall, but just never got around to it in time. Pumpkin is one of those veggies that is obviously good year round (if you’re using canned puree), but is like “in season” for food blogs only in the fall along with the real-life pumpkins. The night we made this (sometime last week), we were predicted to have our first freeze. It was downright cold out. We had the couch piled with blankets and Clive and Libby. Felix was insisting that this box of recycling was his new bed: 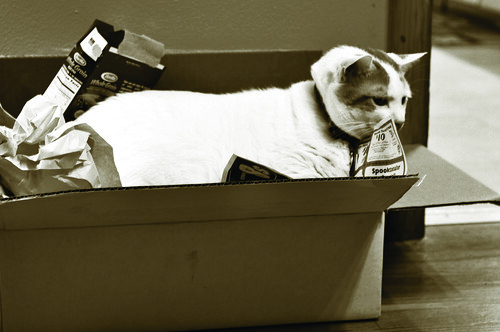 It was just the perfect night for a baked pasta, one of my favorite dishes in the world. I swear something happens to those noodles in the oven (besides cooking) because I can never get enough. We were even able to rescue the last of the chard from the garden, even though somehow it managed to survive the frost and is still growing. If you like your greens, grow chard. It is seemingly inpenetrable by both heat and cold.

Making this is so ridiculously easy! The time really does lie in the 30 minutes it takes to get awesome in the oven. 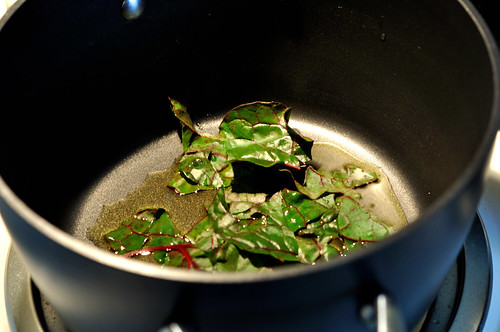 Is this the last of our chard for the season? 🙁 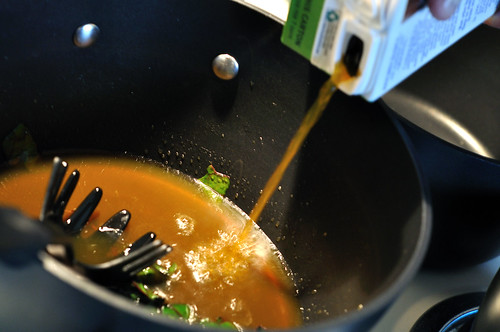 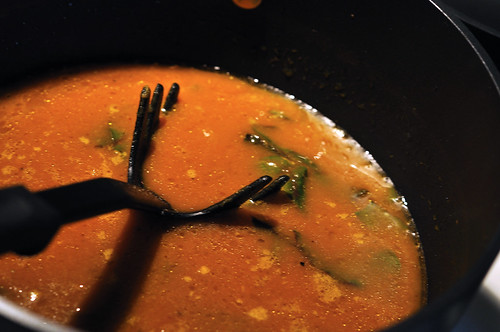 Stir with pumpkin goodness and bring to a simmer. 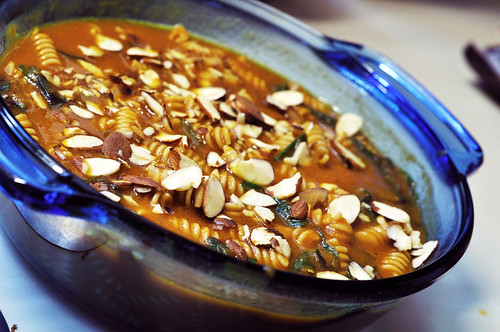 At this point I was worried we had done something wrong, it looked like soup! 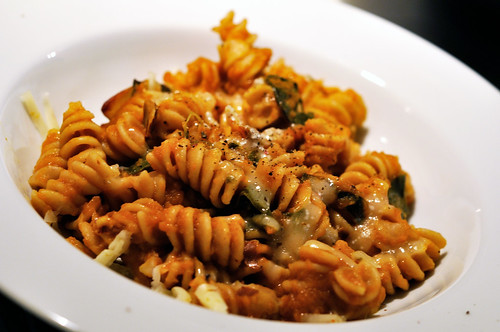 1. Cook pasta according to directions; drain and toss with cold water. Preheat the oven to 400 degrees.
2. In a large saucepan over medium heat, add oil. Once warmed, add chard and cook for 3-5 minutes, stirring until wilted. Add pumpkin, broth, and brown sugar. Stir and bring to a slow rolling simmer. Season with salt and pepper to taste.
3. Toss pasta with pumpkin-chard mixture. Transfer to a 9×13 baking dish or eight individual ramekins. Top with almonds and additional brown sugar if desired. Bake uncovered until top is golden, around 30 minutes. Top with fresh parmesan and additional salt and pepper to taste.

It’s baked. Pumpkin. Pasta. What else needs to be said? We love it, even more than I thought we would. Say what you will about carbs and the heavy feeling you get after eating a bowl of pasta, but on a cold, dark night, sometimes I like the feeling. There’s a reason they call it comfort food after all. Better still, it’s another easy, meatless dish to make on a busy weeknight. Even if “busy” means curling up and playing dead on the couch.

If you could eat one comfort food in unlimited amounts without suffering any of the consequences, what would it be?