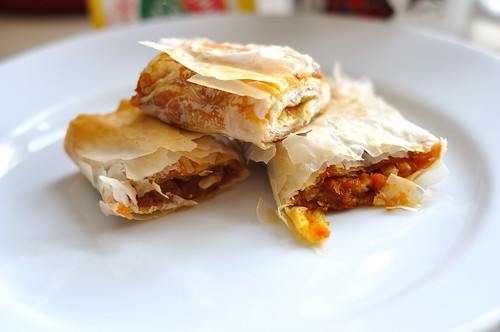 I think the greatest high any new cook can experience is when something they always thought would elude them becomes something they can make without anxiety or pre-scripting excuses. By that thinking we’ve been high quite a bit over here in the past year. We’ve gone “from scratch” with a lot of our cult favorites. We healthified and made our own corn dogs. I made brownies from scratch. Neil made a rack of ribs. We still have a ways to go though, and one of the areas that constantly eludes our pwnage is pastry. There’s nothing more aggravating then a trip to the bakery, seeing all the Danish and doughnuts, and knowing that you just haven’t properly captured the morning splendor of pure sugar and puff pastry.

Enter my guardian angel of a neighbor Mary. Phyllo has been a member of her family longer than she has. 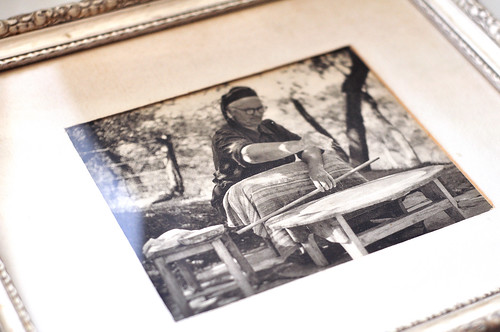 Growing up, a mysterious black-and-white photograph of a stocky, muscular person always hung over the family kitchen table. She always thought it was a man, but years later found out it was a woman, rolling out phyllo dough by hand on a large round table. She still doesn’t know the identity of the woman. A grandmother, possibly a great-aunt? The identity is still a mystery as the photo hangs in her own kitchen. 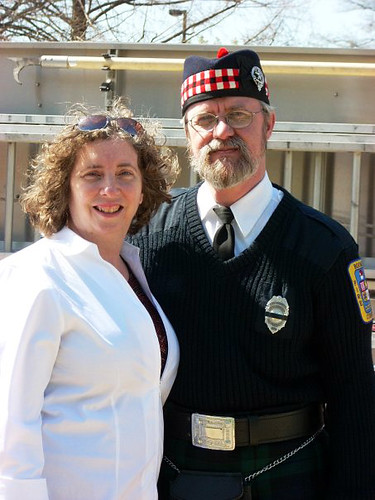 Mary and her husband John

Like me, Mary grew up in a dual culture family. Her father was an immigrant from Bulgaria, her mother an American. While I grew up watching my grandmother make enough Kraut and Spaetzle to feed my football team of a family, Mary has been eating phyllo since the time she could eat solid food. So when I had a failed first try at using the thin, seemingly impossible dough, she volunteered to help.

So last Friday after work, she imparted wisdom and beautiful family history and taught me to make Tikvenik (TEEK-vih-NEEK) a rolled phyllo or “banitsa” with a slightly sweetened pumpkin filling. Both savory and sweet (because I like pastries that are both), it’s perfect for fall.

Turns out I was totally overcomplicating phyllo. The “rules” are really quite simple. Mary writes:

It’s not difficult stuff, and never should be feared—Daddy always said to let the frozen dough thaw properly in the refrigerator before using it; keep it under a slightly damp towel after taking it out of the package; don’t use too much filling; and if it breaks, you can patch it! And he preferred using butter over margarine or oil—he believed in, as he said, “the real thing”! He taught me a special way of drizzling the butter over the layers of phyllo before rolling them, so there was always just the right amount. 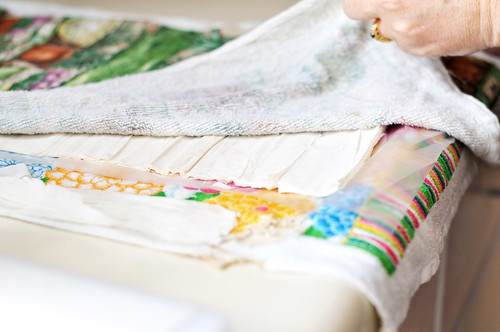 1. Preheat the oven to 375. Lightly grease a cookie sheet. Open the package of phyllo dough, gently unfold it on a dishtowel covered with waxed paper, and cover it with a lightly dampened dishtowel until ready to use—this keeps it from drying out. 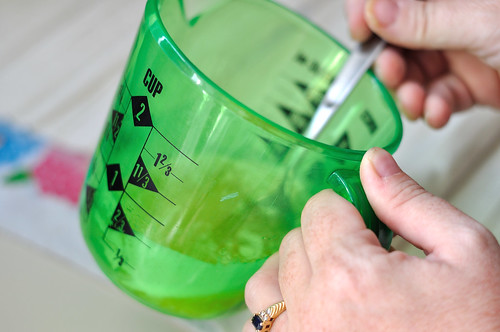 2. Melt the butter over low heat; alternately, warm the vegetable oil over low heat, taking care to keep it only warm, not hot. We warmed ours in the microwave. 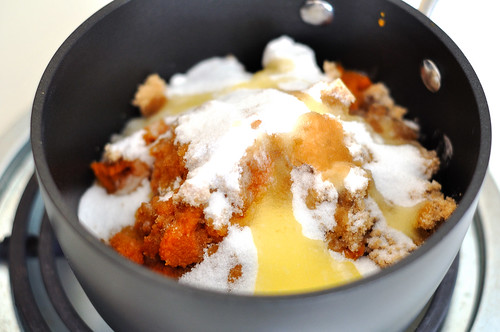 3. In another pot, mix the pumpkin, the sugar, cinnamon, cloves and nutmeg with a tablespoon of melted butter or oil—stir to combine.  Heat the mixture until the sugar is melted and incorporated, and all is the consistency of a somewhat dry pumpkin pie filling; let cool a bit, then mix the beaten egg in. At this point, stir in the walnuts if you are using them. 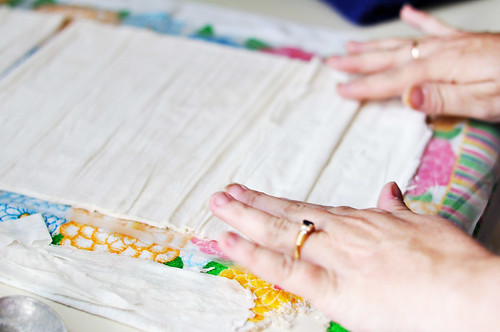 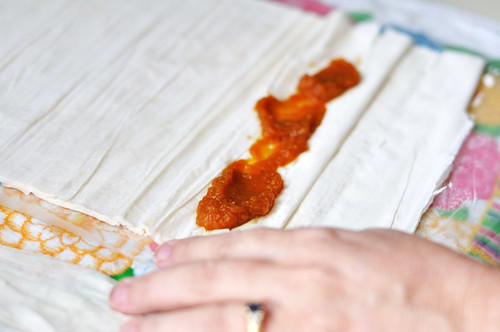 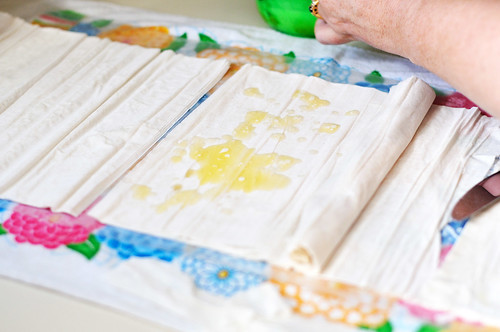 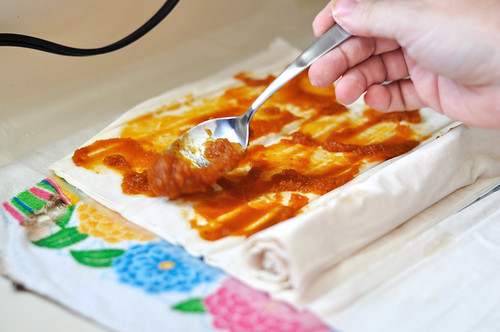 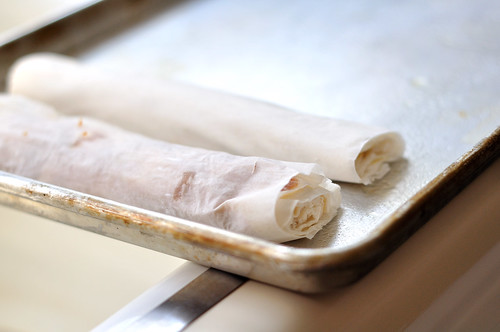 4. Have the phyllo facing lengthwise away from you. Take the towel off the phyllo, take the first two sheets, and fold them up and away from you about 2 inches or so.  Spread about 2 spoonfuls or so thinly across the phyllo–enough to cover the width of the phyllo you have folded, but leaving about a ½ inch border. Dip a spoon into the melted butter/oil and drizzle it across the phyllo sheets in front of the pumpkin. Gently take up the part with the pumpkin on it and roll it—like a jelly roll—just enough to enclose the pumpkin. Spread more filling thinly over the rest of the phyllo sheets (leaving a small border all around), drizzle more butter/oil, and roll up gently (not too tight) to the end. Place on the cookie sheet, and cover with a damp towel. 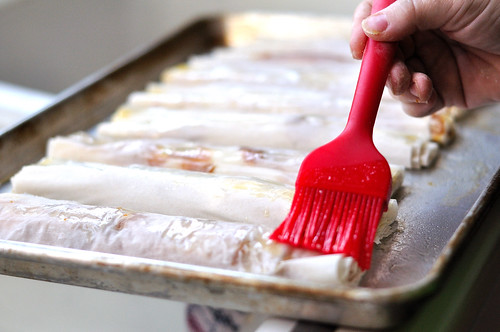 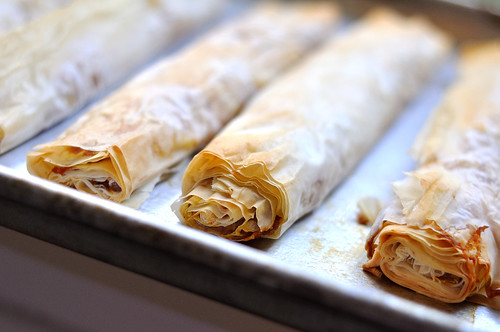 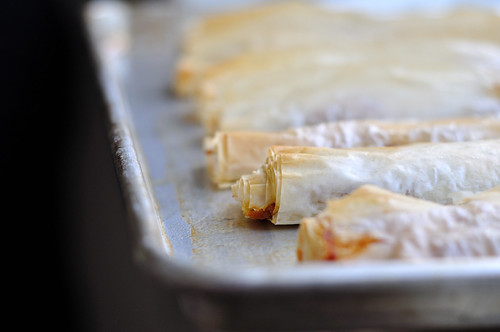 5. Repeat until all phyllo is used up. Brush finished pieces with melted butter/oil; bake 15-17 minutes until golden brown. Makes 8 Rolls.

Tip: If your phyllo begins to come apart as you are rolling, you may brush it with some butter/oil and patch it with another piece of phyllo—just roll it around the previous piece! Consider the butter/oil an “adhesive” in this case.

This recipe may seem simple, and it is. But to Neil and I it feels like another window has been opened. It gave us not only the opportunity to learn something new, but see someone through someone else. I will never meet Mary’s father. He passed away several years ago. But regardless, I know him to be an incredible man. A legend. Someone who always had the right thing to say in every situation. A man who delighted everyone, whether they be family  or the fruit clerk at the grocery store. He wasn’t with us, but he was. His guidance literally felt like hands on our shoulders, his humor in our every laugh, and his wisdom imparted through his brilliant, caring daughter. For that, we’re doubly blessed.