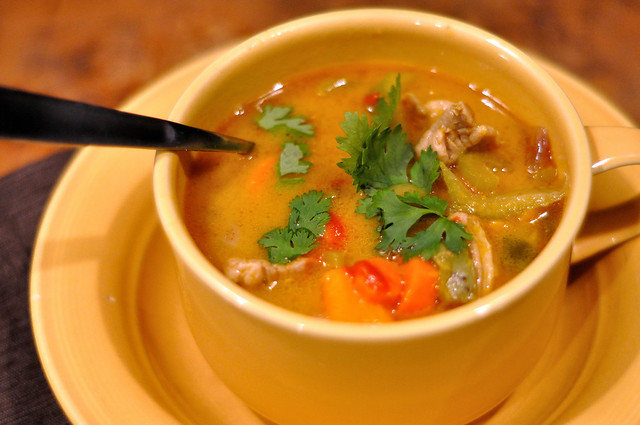 Paleo + sweet potatoes. Next to bacon, I don’t know if there is a more popular association — which is unfortunate, because we don’t actually eat that much bacon — a post for another day.

The inspiration behind this stew is a cup of sweet potato stew I was surprised by last Friday while eating lunch with friends at a local spot. For weird, almost Seinfeldian reasons, I never order soup or stew from restaurants, but as I was unfamiliar with the restaurant’s menu, I told Neil to “surprise me” and order for me at the counter while I found a table. This stew appeared with my reuben sandwich (a favorite cheat) and it was love at first slurp, the perfect combination of creamy soup and hearty stew. I knew we had to have it in our recipe collection.

This is my first go at it, and I think I came pretty darn close. I’ll share my ideas for my next batch below the recipe — let me know what you think! 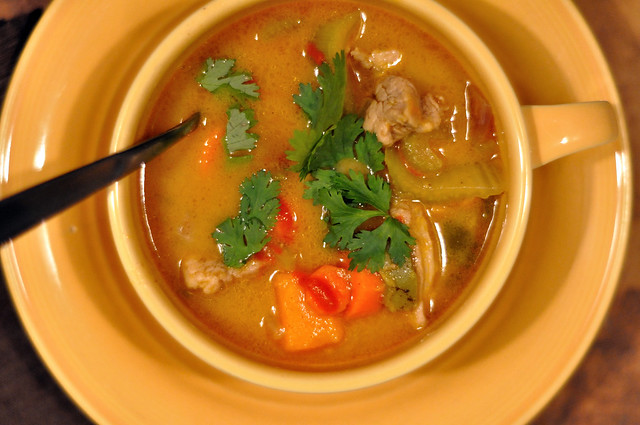 As I mentioned above, I’m thinking of doing round 2. I have plenty of ingredients left since grocery stores assume all people have at least 3 kids in the midwest, and I’m pretty sure Neil would eat soup all day long if he could. For my next round, I’m thinking of upping the almond butter and creating a sweet potato puree with a third sweet potato. I’d decrease the amount of broth to offset, making the final result creamier and less brothy (legit technical term — don’t judge).

Little ideas for improvement aside, this is an amazing soup. I’m thoroughly convinced after this stew and our hugely successful African Beef and Peanut Stew, that almond/peanut butter is a key ingredient. Maybe I’m just a newb, but it’s the last ingredient I would have expected to make such an impact. This coming from a girl who likes chocolate and coffee in her chili.

Edited to add: We upped the almond butter and cut the veggies smaller and instead of creating the puree, we displaced a little of the broth with a 14oz can of coconut milk. Delish!