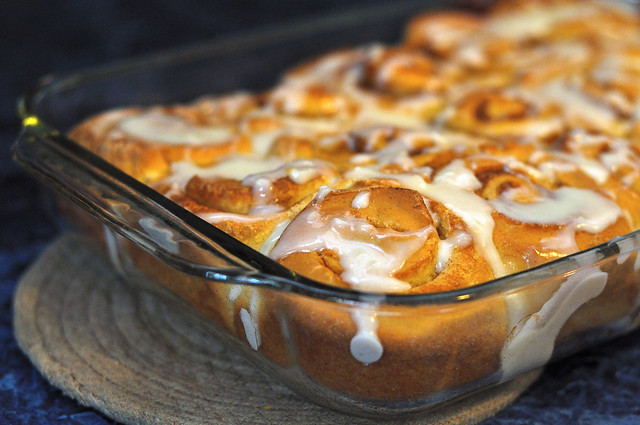 If you were on Twitter Tuesday night, you may have noticed I spent the entire night baking and prepping breakfast for my first meeting with my new department staff at work the following morning. It wasn’t anything groundbreaking, just a nice double-batch of homemade cinnamon rolls — or at least that’s what I thought.

When I arrived at work with my freshly baked rolls, people were plowed by the idea that I had baked them from scratch that morning. It reminded me just how different my worlds (online vs “real”) can often be. When I’m online and typically immersed in food blogs and communities, cooking and baking from scratch is not only expected, it’s assumed. However, in my “real life,” people are often surprised or impressed when I bring food I’ve made from scratch or even assembled from pre-made ingredients. They either see it as something special that rarely happens, or act as if I’ve resurrected an antiquated trade. It’s a weird contrast, but I was happy they enjoyed breakfast nonetheless. Food is always a great way to meet people.

I call these Overnight Cinnamon Rolls, but really, they could also be called Lazy Cinnamon Rolls. The effort they require is laughable, and if you don’t use all the dough right away (this recipe makes two batches of cinnamon rolls), the dough actually develops more flavor the longer it sits in the fridge (within reason, don’t see how far you can push that statement).

The bread dough itself is the Master Dough Recipe from Artisan Bread in Five Minutes a Day, but it’s almost identical to the sweet dough my grandma used for years for her cinnamon rolls, so where it originally came from I have no idea.

Note: The directions below detail making a full batch of the Master Recipe, which will net you two batches of  cinnamon rolls with approximately 9 rolls per batch. You are of course more than welcome to make all 18 or so rolls at once, and I could recommend 1 ½-2x the filling and icing recipes, depending on how gooey/sticky  you like your cinnamon rolls. 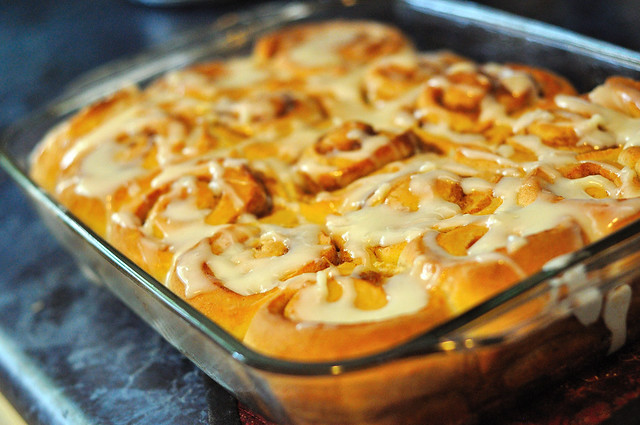 Makes 9 cinnamon rolls (I squeezed 11 out of my batch by not discarding the ends). See Note above for yield/batch information.

I prepped everything the night before, woke up fifteen minutes earlier than normal to preheat and roll out/cut dough and they were ready to go by the time I had to leave for work. Best yet, the house still smells amazing and I have a ½ batch of dough left for later this week. Although you certainly wouldn’t want to eat them every day, they are a great treat and never fail to surprise and impress!

Like baking your own bread? Here are a few more of our favorite recipes: