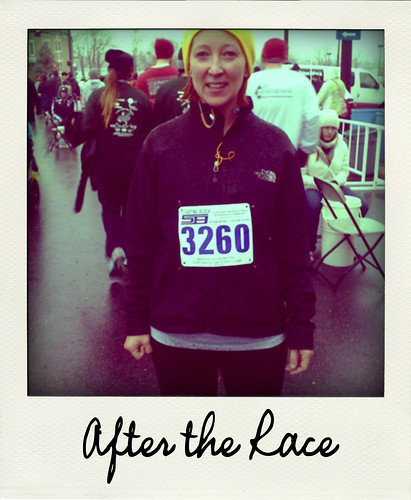 Well, as Neil would say, “I deeeeeeed it!” I ran my first 5k! In 37:25, so not too shabby for a first-timer, and considering the rain and cold we ran through, I had a pretty good time doing it. Everyone was totally right when they said it’s completely addictive. It’s amazing to not only feel like you’ve reached a milestone, but so early in the morning with so much day leftover to boot!

We were up bright and early with the non-existent sun at 6:00 a.m. We had to be downtown to pick up our registration packets by 7:15 a.m. yeoooww! We made it and by 7:30 were waiting around with nearly 7,000 other people ready to brave the wind and threatening rain for what is one of the biggest races of the year in southwest Missouri. Since it was so early and the weather was so terrible, there were very few spectators (including our would-be photographer). There were however tons of people dressed up in costumes, some dressed in whatever they could throw on (camouflage and cowboy boots, really?) and some had some enviably cool cold-weather racing gear. My gear wasn’t fully dry from the wash (doh!), so I was dressed in my mother-in-law’s leggings, my new North Face Shell and a long sleeve t-shirt and my Apple hat. Yup, completely newb and geek ‘till the end. 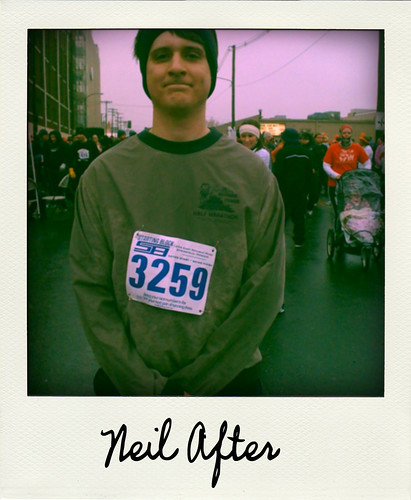 We started out in the 11:00 minute mile group. I wanted to run where I was comfortable and not feel like I was totally out of my element. Next to me was a woman with her three-legged dog. Perfect, I thought, as long as I could beat the three-legged dog I wouldn’t feel like a total failure.

Within the first mile I put several beats between me and the three-legged dog (he didn’t plan ahead and had to pee several times). I was running among a few first-timers, a seventy year-old (!!) and lots of kids. There’s nothing more humbling than being pace-matched by someone nearly three times my age and a bunch of ankle biters who won’t be able to vote till I’m nearly forty. The course wrapped around my former college campus, and it was cool reminiscing at how much my life has changed since I last walked the campus. I ran past my art building, the library, my former dorms and my all-time favorite take-out place (Dragon Inn anyone?).

As expected, my endometriosis decided not to take the day off. Around the 1.5 mile I definitely felt the pangs of what I like to call “Ovary Tweak.” It literally feels like someone is twisting my ovary, and the pain was quick to shoot down my entire leg, stopping around the knee. It was aggravating, but by taking longer strides and a few quick walk breaks, I kept it at bay (gotta have a sense of humor about it). 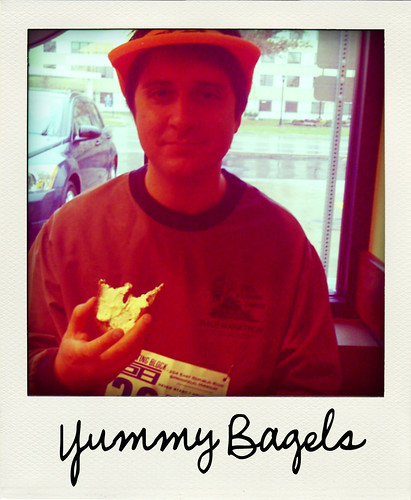 After the race, we enjoyed a celebratory breakfast at Einstein Bros. Bagels. They have ridiculously good hot chocolate and pumpkin bagels, and Neil is fully amenable to an IV drip of their coffee should they ever offer it. Like his foam hat?

All in all it was an amazing experience. I’m already looking forward to my next race, hopefully sometime after the New Year. I’d also like to up my game and do a 10k. More than anything, I’m so glad I never just accepted the bad days and painful moments as what I was limited to. I also want to thank everyone who has given me support, not only in the weeks leading up to this race, but throughout the year as I’ve posed plenty of dumb questions and been kind of a hanger-on to many of you.