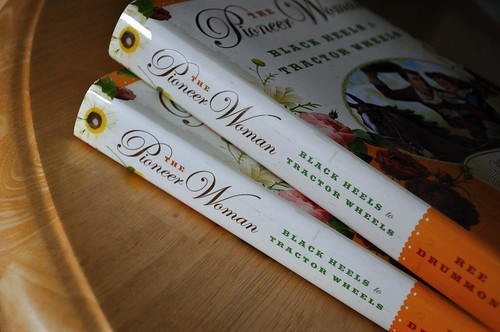 I’ve been squealing online for weeks about the Pioneer Woman book signing that happened in St. Louis over the weekend. I’m not a crazed PW fan or anything, but when your freelance and grad school ambitions keep you from getting out much (read: keep you from getting out at all), you tend to get excited by almost anything out of the norm. I’m wearing clean socks today!

My best friends (Anja, Rachel and Liz) and I decided to make a FULL weekend of it, so we booked a hotel room and made the two-hour (five hours for Rachel and her friend Allison, that’s dedication) drive to St. Louis. Somewhere on that car ride we became the CIA, hell-bent on stalking our target and being FIRST in line. Nothing is worse than a book talk/signing and being the last in line and in the back. So after scoping out our target, the St. Louis Public Library, we grabbed lunch and headed back to what we thought would be no line.

We weren’t first. We were somewhere in the area of 30-35th in line.

Apparently in the midst of our relaxed mall Mexican-fusion lunch and our sidetrack to Williams-Sonoma, we’d been compromised and beat to the punch by some really insanely loyal fans. I’m talking people bringing at least five books and a gift. A gift!? I thought that was a little strange. Don’t get me wrong, if Eddie Vedder showed up for a book signing, I’d bring a gift (the gift of ME. Sorry honey, celebrity encounter rule!), but it just seemed a bit, I don’t know, over the top? I’m not talking about trinkets either, I’m talking gift baskets. Google “Pioneer Woman Book Signing St. Louis, I dare you. She even apparently has haters, but I won’t even go there. 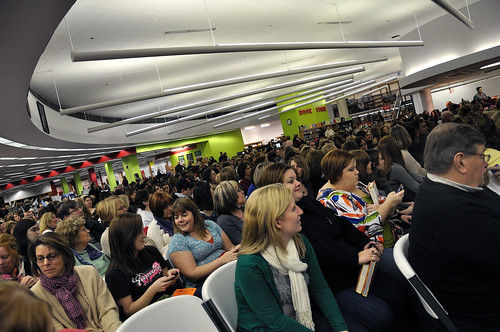 So after waiting two hours in line, we finally filed into the library, conveniently cleared of patrons and lined with more chairs than I could capture with the camera. 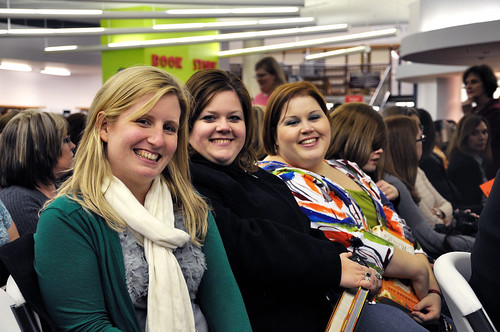 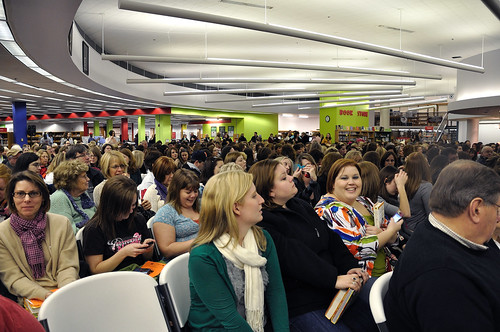 Look at the scowl on that woman’s face. I’m thinking she wasn’t so amused by my charm. Or my huge camera lens. 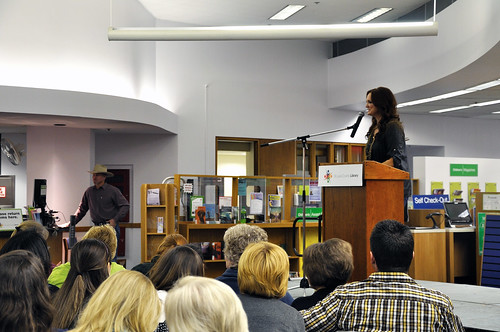 The talk didn’t actually go that long, I think the people who weren’t there for the signing were kind of peeved. She was very shy and seemingly still baffled by her fame. She answered a few questions, and fielded a few to her husband, Marlboro Man, who had tagged along. Rachel was so impressed that they had driven to St. Louis because it meant they drove through Springfield to get there. In the true spirit of being Neil’s wife, I was just wondering what they had driven.

After the talk, they released us in groups to get our books signed. Here are the girls waiting after Marlboro Man had signed our books. I swear I saw an old lady try to cop a feel. Apparently his reverse side is quite famous? 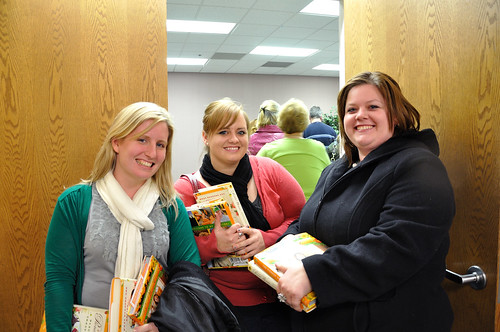 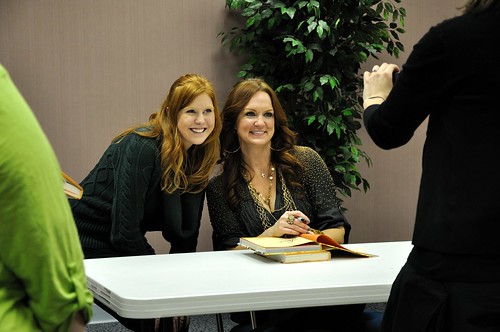 This girl is smug because she was first in line. 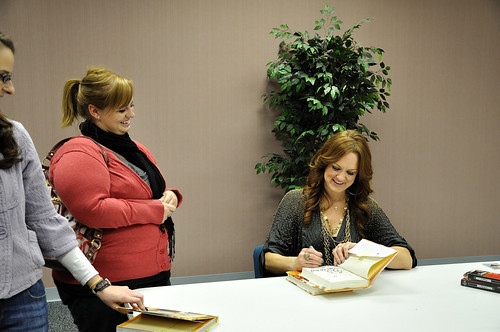 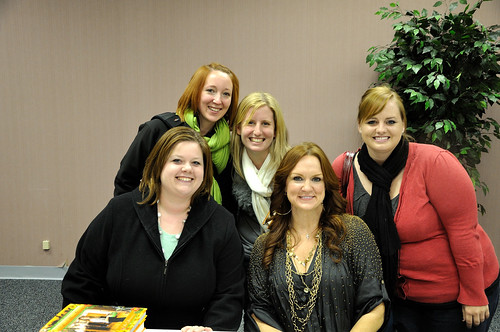 And all of us… 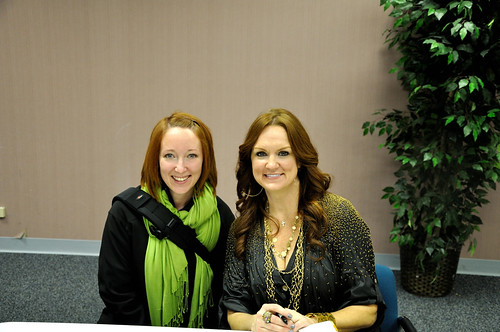 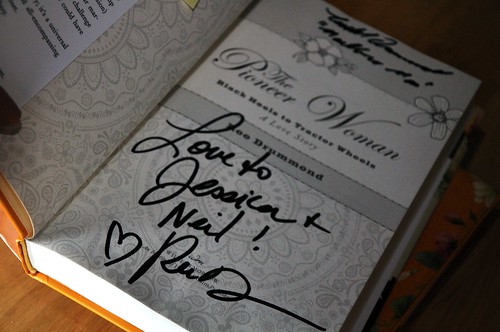 In case you’re wondering, no, I haven’t read the book, Black Heels and Tractor Wheels, yet. It looks good, and it’s an incredibly gorgeous looking book. It’s even beautiful beneath the jacket it if any of you true bookworms decide to take a look. I typically save these books for travelling, and the next time that looks to be happening is June, though I might try to sneak some reading in here or there before then if I can manage it.

I had so much fun going to this event, for more reasons than just having the opportunity to meet Ree. Maybe some of you can relate, but I feel like blogging is sometimes the more socially acceptable alternative to being a Trekkie. Despite the fact that the Internet is so mainstream, there still seems to be a stigma surrounding those who meet, operate businesses and socialize online.

Maybe it’s because so much of my life and occupation involve technology, but I just don’t get it. I’ve met and maintained my best relationships online (including with Neil), and operate a business that has exploded over the past year because of Twitter and this blog. Some of my family and friends think I’m a bit strange for blogging, etc. but at events like this, everyone has a huge camera and a netbook, and you knew in an instant that they were there doing the same thing as you, and it’s thrilling! I don’t say it enough but thank you so much for continuing to read and watch us grow, and for giving us a community to feel a part of.

So on that note, are you reading any good books lately?