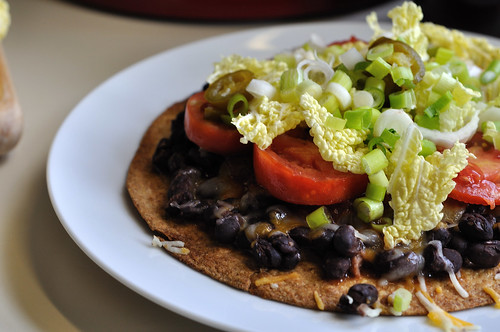 I don’t know what it’s like where you are, but it’s been HOT here this week. High temps, heat indexes in the triple digits, and humidity that makes going outside feel almost like taking a shower. Is it possible to get cabin fever in the summer?  The last thing we’ve felt like doing is cooking. Who wants to run the oven or sit over the stove? So last night, out of ravenous hunger and kitchen avoidance, the Mexican Pizza was born. 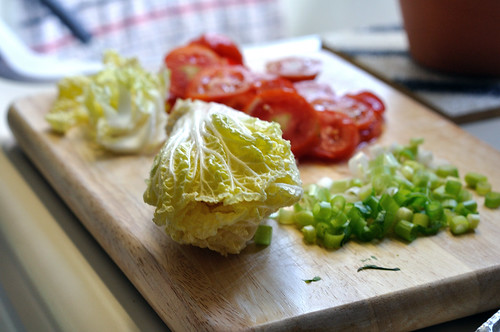 Made with leftover whole-wheat tortillas from our camping trip, some refried and black beans, cheese and an awesome array of local and organic veggies. The tomatoes and peppers are homegrown in the yard, probably some of the few we’ll have for the whole season (boo!). The Chinese cabbage and green onions were take-home goodies from my cousin Lora’s organic farm in Bozeman, Montana.

Neil lightly brushed the tortillas with olive oil and put them in the oven at 350 F for a few minutes, then turned on the broiler to get them lightly brown and crispy. We then spread the beans, topped with cheese and a bit of salsa, and put them back in the oven until the cheese was melted. We then topped them with the veggies (mine was stacked high) and scarfed.