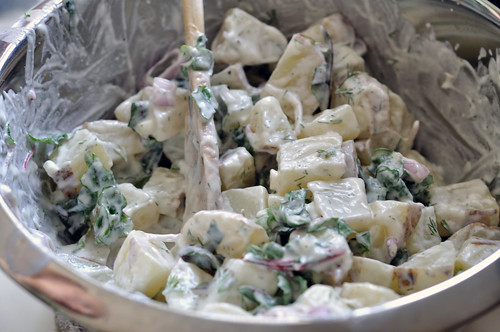 If you’re like me, one of your favorite staple summer barbecue foods is potato salad. At more than one party I’ve attended, it’s been the only veggie option available. The pitfall is that it can be the most unhealthy offering, high in both calories and fat. I’ve also never much enjoyed the huge amounts of mayo and mustard and even eggs people put in their potato salad. Yuck! Who wants to each such  heavy food on a hot day? I compiled my potato salad recipe from several, and its both light and filled with herbs and fresh greens. The chard came straight from our garden! It has an amazing flavor, and you can eat it without feeling totally gnarly after.

1. Fill a four quart (or larger) pot 3/4 full of water. Add 1 tablespoon (or more) of salt. Bring to a boil over high heat and add the potatoes. Bring back to a simmer and then turn the heat down to medium. Cook for 10-15 minutes. This can vary by stove, be very attentive or you’ll have mashers instead (woops!). Cook until the potatoes can be easily pierced with a fork. Drain and return potatoes to the pot.
2. Use a fork to pull a hot potato out of the pot, and slice it into quarters. Repeat with the rest of the potatoes, adding them to a large bowl as you cut them up.
Whisk together the yogurt and mayonnaise. Toss the potatoes with this dressing. Doing this while the potatoes are still hot will allow them to soak up the yogurt/mayo. Toss with the shallots, chard, and dill. Season to taste with salt and pepper. Refrigerate for at least an hour before serving.

These are so creamy and good, you won’t feel like you’re missing out! Hopefully we’ll finish my mistake batch tonight. Do you have a non-traditional go-to potato salad recipe? I’d love to try more!