Cataclysmic Macaroni and Cheese with Pancetta 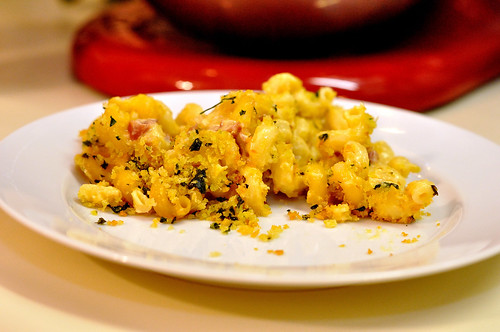 Okay, there’s something you might not know about Neil and I. We game. Not football, or frisbee, or soccer or baseball, …computer games. I definitely never saw myself ever becoming a gamer. I’ve always been more of a movie nerd, or a memorizer of useless trivia. But as weird as it is to say, gaming changed my life.

I first stumbled into it when Neil and I started dating (3 hours long-distance). He’d bring his laptop up on his visits and while I worked on design projects or things for school, he’d plug in and play battlegrounds in World of Warcraft or missions in his latest first-person shooter game. 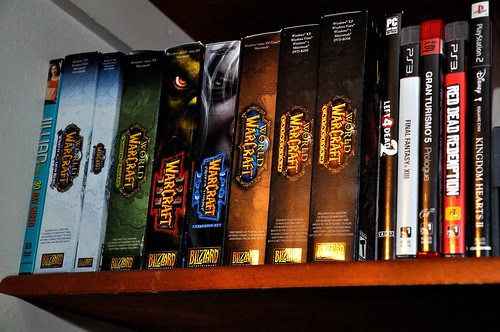 The gaming shelf in our closet, replete with World of Warcraft expansions…

I was fascinated, especially by World of Warcraft or “WoW.” Unlike the Nintendo games I played as a kid, World of Warcraft was an MMO, a Massively Multiplayer Online Game, meaning you play with other people and the game is never the same each time you log in. It’s even dare I say…a little quirky? You can learn recipes, cook, make potions, and leatherwork. You can even buy and sell at auctions, own pets, and dance!

In no time Neil had built me a computer and we were playing WoW during the week when we were apart. I joined his guild and immediately had a built in social network of other players doing the same thing I was. 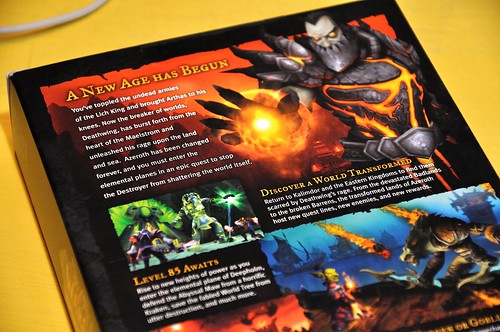 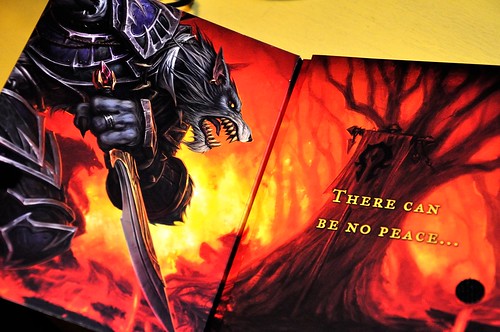 Soon my roommate (both my best friend and ex-boyfriend Blake) was playing and we’d have full-blown gaming nights where we’d cook good food and yell game strategy back and forth across the apartment until we fell asleep. When Neil and I moved out, the gaming nights became more infrequent, but Neil and I still designate Friday as a no work at-home date night where we play WoW and try out new recipes.

We all still get together to celebrate expansion releases, and when WoW released Cataclysm last Tuesday we made plans to level our characters together on Friday night. We made Macaroni and Cheese with Pancetta from scratch and for a bit of game night nostalgia, Mini Pigs in a Blanket. This is only the second time we’ve made a traditional macaroni and cheese, with the full roux preparation, etc. Typically we healthify our mac and cheese with a lot of the substitutions you guys are used to seeing from us. But this was Game Night, so I decided to go full-on macaroni and cheese HO! 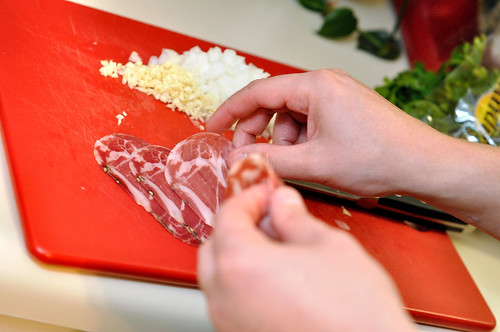 1. Begin by slicing onion and pancetta and mincing garlic. 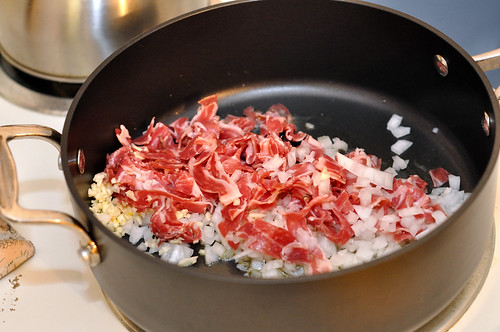 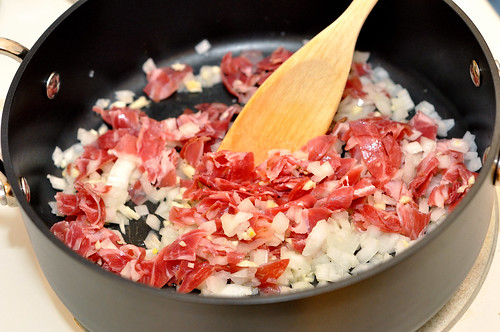 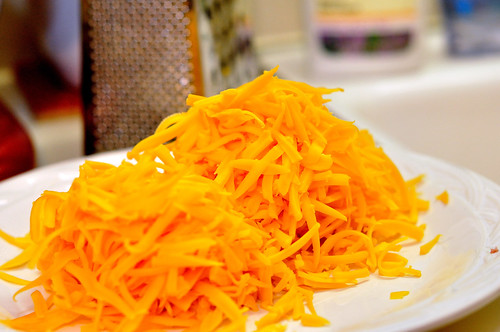 5. Stir in 3 tablespoons butter; allow to melt, then slowly add flour and stir again for 1 minute. Gradually whisk in 3 1/2 cups milk (I say gradually because you might need less!) and simmer until thick enough to coat spoon, continuing to stir frequently, for about 5 minutes. 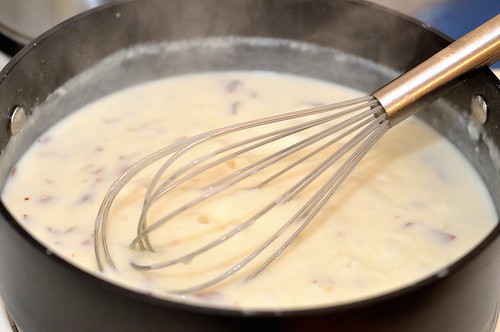 6. Remove sauce from heat. Whisk in cheeses and additional milk by 1/4 cupfuls until sauce is thick but pourable. Season with salt and pepper. 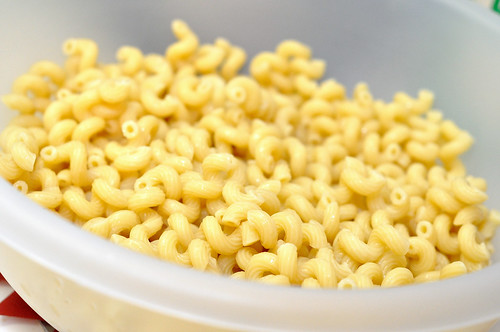 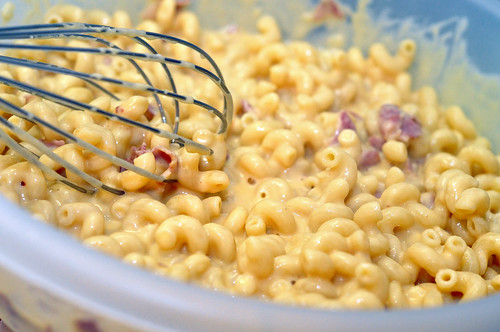 7. Mix thoroughly with noodles in large bowl and set aside. 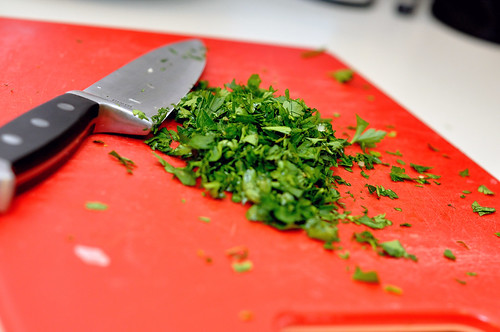 8. Melt 4 tablespoons of butter in large nonstick skillet over medium-high heat. Add panko (or breadcrumbs of your choosing) and stir until very lightly golden, about 5 minutes. Remove from heat and stir in parsley. 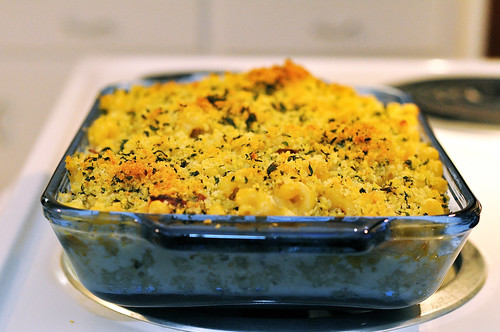 9. Transfer noodles and cheese into a lightly buttered or sprayed 13x9x2-inch glass baking dish. Sprinkle crumb mixture over the top of the noodles evenly. Bake at 350°F until mac and cheese is heated through and topping is golden brown, around 30 minutes. 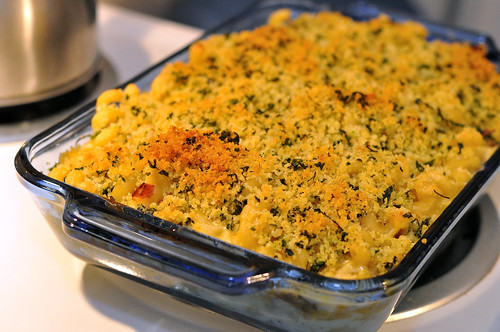 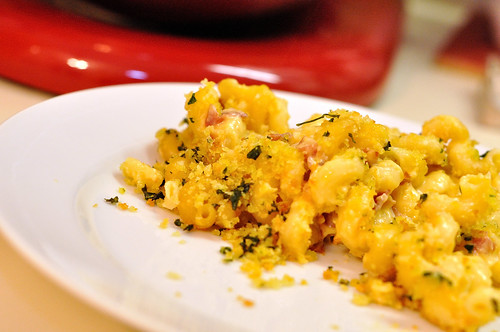 Perfect for cold nights when the thought of going outside makes you eat enough to render yourself immovable! I also made some miniature pigs in a blanket as a side. They’re an easy appetizer to keep around during the holidays if you know you might have visitors of the child-kind. 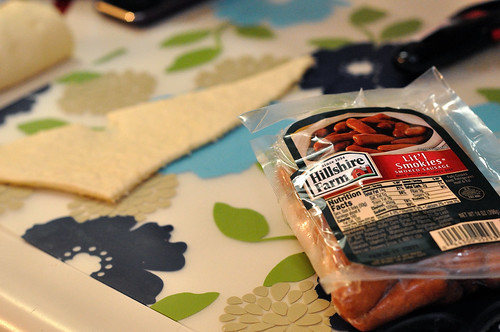 Some pre-made croissant dough and the wienies… 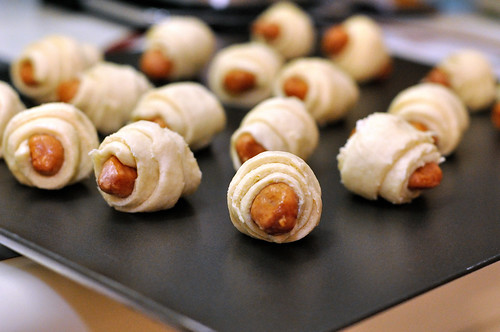 Wrapped around to keep them nice and cozy. I also brush with a little olive oil to keep them from drying out. 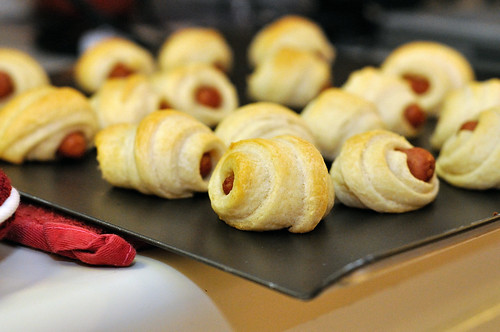 All baked and cozy and ready for dipping!

We had a blast leveling our characters until around 2 a.m. when I finally passed out and the boys continued playing Gran Turismo 5. What do we think of Cataclysm so far? Vashj’ir is a tedious place to level and we can’t wait to get back on dry land!