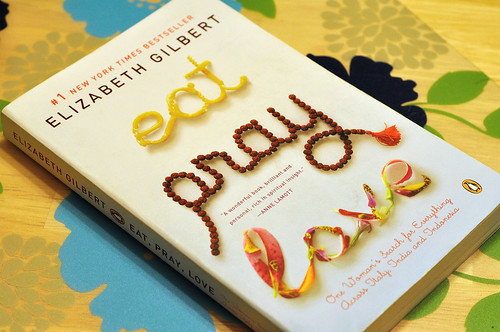 I very rarely get the opportunity to read Chick Lit. Let me rephrase that. I rarely get to read anything that doesn’t involve the words “non-fiction” or “case study.” I usually hoard a few titles for our vacations every year, and this year finally got around to reading Eat, Pray, Love: One Woman’s Search for Everything Across Italy, India and Indonesia by Elizabeth Gilbert. I had only a vague idea of what the book would be like (a woman travels right?) so I dove in one night while sitting by the early evening campfire with Neil.

In the first hour I’m pretty sure my scoffing and grumbles could be heard around the campground. I almost stopped reading. I hated Gilbert. The no nonsense “just get over it” part of me wanted to scream at her through the book. She felt trapped in her marriage and seemingly every night was spending hours secretly locked in the bathroom sobbing uncontrollably over how and when to end it and what life would mean outside the expectations that seemingly all women face. You get married. You have babies. You’re a mother and a wife, and whatever follows is nothing different than anyone else before you. Sound harsh? Well in the moment that my eyes rolled over that sentence I perked up. Well actually it was a little before that, on page 11:

“I saw the joy in her face and I recognized it. This was the exact joy my own face had radiated last spring, the day I discovered that the magazine I worked for was going to send me on assignment in New Zealand, to write an article about the search for giant squid. And I thought, “Until I can feel as ecstatic about having a baby as I felt about going to New Zealand to search for a giant squid, I cannot have a baby.”

Exotic locations and giant squid aside, this situation has seemingly been on repeat for me my entire life. Growing up, I never wanted to be mommy when we played house, never fantasized about my would-be husband or my dream wedding and never secretly bought shit for my unborn children. Even at eleven, it all felt so prescribed, like a factory conveyer belt where nothing can deviate from a single form line. My dad always used to say that he was raising me to be exceptional in anything I chose, always emphasizing that doing what everyone else did for the sake of fitting in or not being uncomfortable was as bad as not trying at all. So as someone straddling the “childfree or not” fence and not looking to follow what most people typify as the “American dream,” Gilbert had my full attention.

Still reeling from the bitter divorce and break-up with her first post-divorce relationship, Gilbert quits her job, puts her belongings in storage, and secures an advance from her publisher for a book about the loosely planned year-long trip to discover God and the nature of her existence.

You never really get a picture of the extent of her metaphysical crisis, only that she came close to suicide, and struggles with depression and anxiety. Each time she touches upon depression, or uncomfortably dark moments or experiences, she tends to interject a lot of humor to seemingly cloud the issue, ready to move on. In fact, you never get a picture of any of her real-life baggage while she’s traveling. Everything is carefully crafted and anything negative is tucked away. Kind of like Disneyland.

Each country brings about its own reformation. Italy makes Gilbert feel whole again. She attempts to master indulgence and self-love without questioning if she deserves it or not. In the process she explores Italy without a map, taking in the food, history and language, and why Italians are so successful at being…Italian. Italy serves as a band-aid. India serves to strip away the indulgence of Italy and focus inward with the goal of being self-fulfilled and self-reliant through meditation and the ability to quiet one’s own mind. Bali serves to balance the natures of both, although Gilbert admits in the book that by the time she got to Bali, all the goals she had set for herself in the trip had already been met.

Overall, it was a fun light read that makes you think about your own life. If you love food and travel with a bit of history and talk of religion that isn’t evangelical Christianity, it’s a look both backward and forward with a breath of fresh air. For me, it was the reassurance that life outside “married and pregnant by 30” is not only possible but optimal if you become the administrator of your own happiness. If you read other reviews you’ll find that the bulk of readers find her to be unaware of her privilege and self-absorbed. I don’t disagree. What I do think though is that any journey of SELF-discovery can’t be anything but self-absorbed. You can’t find yourself unless you self-analyze and you can’t write a book about it unless you use the word “I.”

So will I see the movie? Of course. Neil’s taking me tomorrow. He just doesn’t know it yet.