About that Weight Loss…

I was recently interviewed by Siel at Green LA Girl about a comment I left on a blog stating I had success losing weight by eliminating frozen/boxed food from my diet. She initially asked if she could simply just read my story on my blog and it was only then that I realized I have never talked about my weight loss here. I’m not going to pretend I lost a person or can stuff my whole body into a pant leg of my old pants, but I am currently at a healthy weight and in the best shape of my life, which is a vast improvement from nearly four years ago when my life was in a very different place. 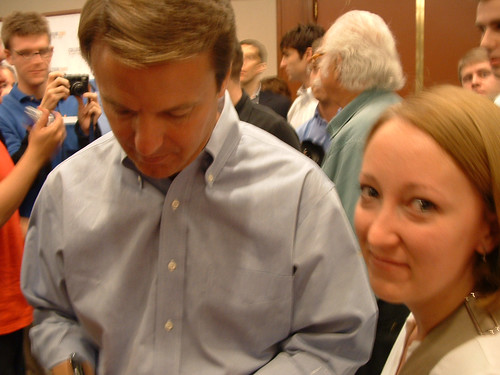 In 2005 I was a year out of college and just starting my career when my health hit a brick wall. Adjusting to a sedentary desk job after being an active on-campus college student was rough. To top it off I was in a relationship that also wasn’t making the transition well and he had a perfect metabolism. I ate what he ate (mac n’ cheese and frozen pizza), and it caught up to me. I went from 120 to 155 in a year. When my relationship ended I had even less motivation to cook. Who wants to cook for one person? I couldn’t afford a gym membership, and I was so embarrassed and ashamed all I really wanted to do was hide. This is one of the few pictures of me, at a political rally meeting John Edwards. I hid behind baggy shirts, pants, and messenger bags.

To be a sap, the person who changed it all for me was Neil. After we met early in 2006 I realized that if I ever wanted to be happy with someone, I had to make myself both available and attractive to that person. I know that sounds subversive and probably a little sad, but the idea of being with someone I saw as “out of my league” was a huge motivator. I didn’t know at the time if I’d end up with Neil but I convinced myself that if I pulled myself up and took control that at the very least something good was bound to happen.

But I was so clueless. I didn’t exercise, just quit full-sugar soda and ate more salads and less red meat. It did help some, but I quickly hit a plateau.

When Neil finally asked me out (and relocated to be with me) he had years of athletics under his belt and lots of ideas to help me reach my new my goal of being able to keep up with him and be active together. He’d been suffering from the cubicle lifestyle as well and it was the first goal we made for ourselves as a couple.

One of his first ideas was to cut frozen/boxed meals. Have you ever stopped to look at the sodium content in those? Instead, we bought lots of fresh greens, lean meat (mostly chicken and fish) and cooked at home. We brought whole wheat sandwiches and yogurt to work for lunch and stopped eating out almost entirely. The culmination of that coupled with a more active lifestyle (at the time, taking walks) gave me close to a ten pound weight loss in the first 3 weeks. That may not be “instant” enough for a lot of people, but I quickly learned that weight loss and good health is a lifelong endeavor, and that it only works long-term when coupled with activity.

Since then we’ve prioritized our budget to afford gym memberships and I’m back down to around, well what I was in high school! I’m training for my first 10k and a size 2 (used to be a size 12). I don’t want people to read my story and think that just giving up packaged food will change everything, or that it was all the change I needed. It was the first step (of many) that changed everything about how I live now. I read every label. I cook every meal. I work out. I set goals. There is no magic fix and the weight on the scale can definitely NOT be the only measure of success or you won’t succeed long term.

I don’t think I realized how much weight I had lost until I got married and had to get fitted for a dress. Even in the time between my first fitting and my wedding day I lost weight. 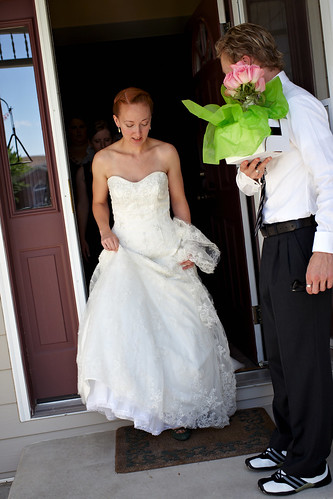 So what were the biggest changes that worked for us?

What ways have you found to maintain healthy weight? Share them in the comments!